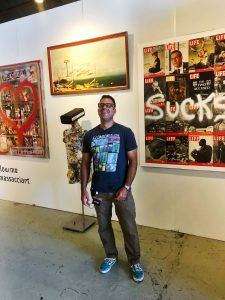 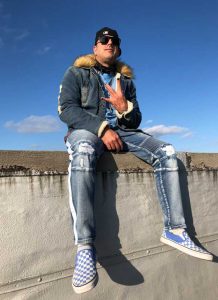 Controversial Artist Paints A Different View For The Masses

A look at James Massacci’s work

Massacci’s work has a distinct effect on the viewer

When you look at James Massacci’s work, you’re not sure whether to love it or hate it. It has a distinct effect on the viewer, forcing them to figure out what the artist was trying to convey. After a while, it dawns on them that the artist has a story to tell and needs to be heard. James has been at the art game for the past fifteen years ever since celebs became interested in his art is when he jumped headfirst into his work.

Two of the biggest inspirations of his current work are Andy Warhol and Bansky. Bansky’s pieces really motivated James to approach his work in a more provoking and controversial way. The premise of his work is supposed to be robust and thought-provoking using his art as a platform to express himself. His earliest works were reflective of his hometown of Ohio with its sometimes bleak backdrops and cold winters. Yet since he moved to sunny Florida, his pieces have adopted more of an 80’s retro look with brighter colors.

He has had numerous shows from NY to California. So far, he has been a part of eight exhibits and is in five galleries across the US (NY, FL, AZ, IL, and CA). His most recent show at the Barker Hangar in Santa Monica, CA, was one of his best. James was very successful in showing his work and selling many pieces. He has also sold private collections to such individuals like rappers Killa Mike and EL-P, Freeway Rick Ross, Michael Blanco (Cartel Show) to Bay area rapper named Berner.

Besides his painting of projects like “The Celebrity” or “Camouflage,” which are his favorite pieces, he also works on collages. What he does is interesting, where he collects vintage magazines like Hustler, Playboy, Life, Time, etc. and creates a large piece using the covers. He completed one called “Life Sucks,” which is 5 x 4 feet. At the moment, he is working on a large painting, which is 4 x 8 feet of an Instagram heart with the quote below, which says, “Looks so much like love but it’s always just like.”

James’ work spans different areas, whether it be comical, provoking, or just bursting with edginess; it leaves its mark. He’s a unique and one of a kind artist in today’s art world that dares to press the panic button with his work. Maybe he has the right idea to make people think and create conversation to divert from the norm. You can check out his work and learn of his next show that may be in your area on his site below.

Be prepared to be blown away. 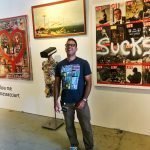 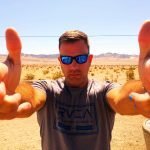